A little more about Isaiah... 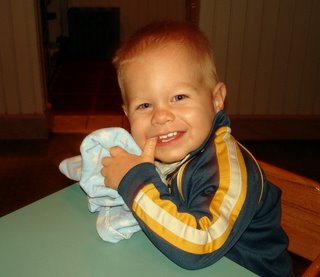 He is now 19 months old & 100% boy-he loves trucks, wrestling, football (he sneaks a few peaks of Monday Night Football with his dad), and stories about heroes from the bible...all while holding his blankie and sucking his thumb.

He studies and inspects his toys intently, and he loves to organize them- we usually find him walking around the house with 2 trucks, or 2 alligators, or 2 stuffed animals (Noah would have loved him). He enjoys lining his trucks and cars along the ledge of the window sill and often when we don't see or hear him for a little while all we have to do is look in his room and watch him playing with his trucks by the window and watching the traffic outside.

He really just loves anything and everything with wheels-suitcases, office chairs, etc. Just the other day when he was playing at Adam and Laura Brown's house (a house with three girls) he came running out making truck noises and holding a giant "Barbie Tea Party" teapot... he was so excited because it had four little pink wheels on it.

Now he has started to climb and mom is finding him on top of all sorts of interesting things...the other day he got stuck inside the toy box/ottoman, and he also is pretty proud of himself for climbing onto the couch and just sitting there talking towards the love-seat like the big people do.

He talks a lot and enjoys engaging in conversation although we have no idea what he is talking about, he likes to include "Edna", "All Done", and "Otay/Okay" in most of his conversations and lately we've been hearing a lot of “Hi Ted!” which is short for “Hi Teddy Bear”

He's got such a great imagination-especially when we put him into his crib for nap time with nothing but a blanket. He just talks and laughs and does somersaults in there.

He loves it when we read to him, and he even sits and looks at his books on his own (but he always reads them upside down). A few of his favorite books right now are: The Busy Dump Truck, Doggies, Barnyard Dance, The Very Hungry Caterpillar and singalong "I Could Sing of Your Love Forever- we sing that one together every night before he goes to bed. He really loves music, especially his “Shout to the Lord Kids!” praise cd.

We love it that he has a gentle, tender, cheerful heart and he has just started initiating hugs and kisses on his own. So now he comes running up to us for no other reason than to give us a hug...talk about totally melting your heart! What a delight and joy he is to us! He is truly a gift from God.
Email This Share to Twitter Share to Facebook
Labels: Journal Entries

We absolutely love coming to your site and seeing our sweet little Isaiah....he lights up our life!