Forgiving our enemies...and loving them too? 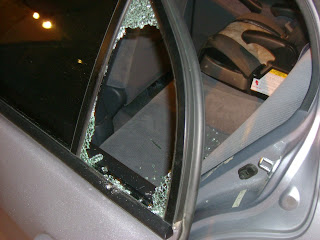 We woke up yesterday morning to the doorbell ringing and our neighbor saying that our car had been broken into…what a way to start the day!

The cop said that 15 cars in the neighborhood were broken into by people looking for guns and money, and she said that they see it so much more around Christmas time-which we found very interesting.

It seems that God has been teaching us a thing or two about enemies lately, which is not something we think about very often. You see, Taya and I like to think that we're pretty easy-going people...looking for the best in others and trying to not make or keep enemies. But over the past couple of weeks, I've been thinking that maybe it's impossible to get through life without having some enemies. When I read the book of Psalms I see that even David (a man after God's own heart) had bitter enemies-and lots of them. Plus, like it or not, as Americans and as Christians we’ve got some enemies here in our country and all around the world.

So instead of worrying over whether we’ve got enemies or not, we’re pondering what to do with them now that we’ve got them. Maybe rather than tormenting us and making us more angry or more violent, they exist to make us more Christ-like and more loving.

So, what does it really mean to forgive our enemies?
In our case, it seems a little easier to forgive the people that we are closer to (like family and friends)-because we love them and we live with them, so we had better forgive them or it will really begin to affect our own life. But what about our enemies- we don't love THEM do we? We don't have to live with them, in many cases we don't live anywhere near them, and in some cases we don't even really know who they are. Why would we even think about loving them?

This was all running through my head as I wandered around the neighborhood gathering the things that the thief had grabbed from my car but later chucked when he realized that none of it was pawn shop worthy. I came back in the house to start my usual morning routine-which includes checking the email. A while back I signed up for this email service that sends a bible passage a day to our in-box as an encouragement to start the day armed with God’s word. What do you think was the verse of the day? Luke 6:27-28, where Jesus shared about a new way of living, and a new way of living with your enemies. He says: "But I tell you who hear me: Love your enemies, do good to those who hate you, bless those who curse you, pray for those who mistreat you." 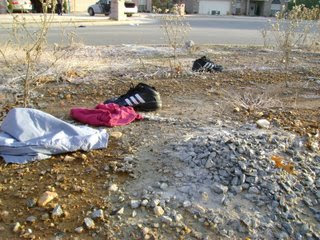 I thought that it was interesting that this was the verse of the day for me, but it was even more fascinating because I’ve been pondering the meaning and application of it for a couple of weeks now.

You see, two weeks ago our family was walking down the street when we came across a crowd of religious demonstrators. They seemed so angry. I stopped to ask what they believed and just have some conversation. The guy I talked to told me that I was a fool and showed a picture of an atomic bomb blowing up and said that's how I would end up “really soon”-annihilated. He said that because I wasn’t the same race that he was, and because of the atrocities that had been committed against his race, I was hopeless and would be dead very soon-there wasn’t anything I could do about it, and no one could save me from it.

I asked him what he thought about Jesus, but he couldn't even put a sentence together to sum up his thoughts. Instead of knowledge and truth, he was armed with hatred-and he was aiming it right at me. I think that's the first time I've seen that kind of hatred up close. And to be honest, I was just kind of stunned. I had a new enemy, and there was nothing I could do about it. As we were walking away, we were asking ourselves what we should do in those kind of situations, and that’s when I remembered the verse and started looking into what Jesus meant by it.

"But I tell you who hear me: Love your enemies, do good to those who hate you, bless those who curse you, pray for those who mistreat you." Luke 6:27-28

So when we ask God how we’re supposed to treat my enemies he replies by saying;
“Listen up Ross and Taya, here’s what I want you to do- Choose to show kindness and love to them-joyfully, do something to bring lasting good to them, speak good of them and allow Me to use them for good in your life, and don’t forget to ask Me to make good things to come their way.”

Wow- what a paradigm shift that is! But what about justice? What about punishment? What about the rules?…That’s not really fair, is it? I guess that’s the same thing we ask God to do for us when we mess up. It’s only fitting that we live it out for others too.
We're probably not going to get out of this life without having a few enemies, but maybe that's not such a bad thing. Maybe God planned for us to show the world that "God is Love" not by how we treat the people who are nice to us, but by how we treat the nasty ones. That kind of love would probably get noticed...that kind of love would probably change the world.

So now what do we do about this guy? 4Iran's prez. Mahmoud Ahmedinejad http://www.foxnews.com/story/0,2933,232681,00.html
“Never forget the three powerful resources you always have available to you: love, prayer, and forgiveness.” ~H. Jackson Brown
Email This Share to Twitter Share to Facebook
Labels: Journal Entries

Thank you Ross and Taya for these words...they challenge us and inspire us to pursue peace...always love and always forgive. After all, only the Lord knows how much mercy and forgiveness He has poured on us!
His grace is AMAZING