Gag-Reflex and the Glory of God...

"You can observe a lot just by looking around." ~Yogi Berra 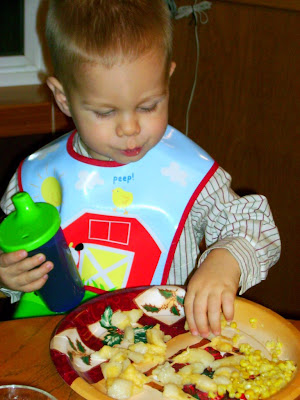 One of the highlights we have as parents is that we get to see the world through a little kids' eyes. It's amazing to see the things that fascinate Isaiah- like bouncy balls, the circle in the sky (the moon), water coming out of a faucet, or his belly button (he likes finding other people's belly-buttons too). But we're just as fascinated by watching Isaiah- his personality, his smile, the way that he plays, the songs he makes up at 6:00am while the rest of the neighborhood is sleeping, and especially watching him eat...Isaiah takes eating very seriously.

Yesterday evening I was feeding him some Taco Salad, which included tomatoes and olives. Part of the deal with eating is that we have to at least take a couple of "polite bites" even though tomatoes and olives aren't necessarily his (or his dad's) favorite foods. Well, I gave him a big spoonful of salad and when that first olive hit the back of his throat I saw something interesting: the gag-reflex.

I know I've seen it many times before, and haven't given it a second thought, but when I saw it in Isaiah, I was really fascinated. God loves us so much that he created us with built-in sensors to protect us from choking. Just like there's nothing too romantic about having airbags for safety on a car, the gag-reflex isn't something that you hear people raving about these days. I would imagine that if you were in a horrible car accident and your life was saved by the airbag, you would probably say something like "Thank God there's an airbag on this thing." But when I saw Isaiah eating last night, I thought "Wow, thank God for that thing." I did a little searching online and found no logical explanation for the gag-reflex from an Evolutionary or Big-bang theory point-of-view. Maybe it's another case for a Creator or the "Intelligent Design" theory. I guess Yogi was right, you really can observe a lot just by looking around.
Email This Share to Twitter Share to Facebook
Labels: Journal Entries, Slideshows and Photos

Hmmmmmm???!!! I've really never thought about the "gag reflex"... but now that you mention it...it really is a good thing!!
I love your thoughts, son...how did I ever get such a brilliant boy ???!!!
Love Mom