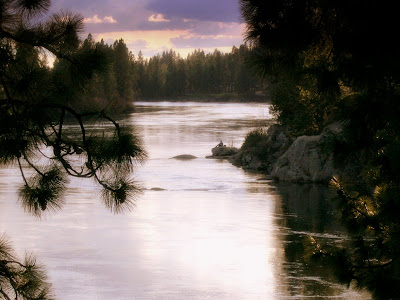 Here's a picture I shot of a fisherman on the Spokane River. I had just spent three days running from airports to team meetings to radio stations to recruiting appointments... One of the last appointments on my trip was an invitation to dinner with a wonderful family who lived right near the river. When I called to get directions they suggested that I come early and rather than going straight to their house, I should sit by the river for a while. In fact, they gave directions to their house by saying "go across the bridge, turn left on UpRiver road, drive half a mile, then pull over alongside the river."

What if the next time you gave someone directions you included "when you get to our front door, make sure you stop to smell the roses" or "when you reach the top of the hill, you've got to pull over and look behind you at the beautiful valley". I don't think I've ever had an invitation to do that, but it was exactly what I needed.

gorgeous photo. great advice. now to get some pretty flowers near my door.....! - tam (thankfully we can tell people to check out mount baker - that's always a good reminder of our Creator!)

Beautiful picture, son...good that you took that "moment" to look at what God makes!
He loves beautiful things!
We love you...
Mom and Dad

What an awesome picture Ross! So glad you took that moment too! Love you, Cher