The other night Taya and I were reading in bed and I started into a magazine article about children in Uganda. I told her that I would read it out loud to her because it looked like a good article. As I read, I quickly realized that the story of this little orphan boy Matthew was going from bad to worse. It started by talking about his mother being raped, pregnant, and eventually giving birth to Matthew. Then she abandoned him. He started out with no family, but eventually made his way to "Noah's Ark children's ministry" where he receives food, clothing, education, and love, all things he had done without as he spent the first three years of his life wandering around the slums. Taya and I won't let our two-year-old out of our sight for more than a minute, we don't even like for him to be in our fenced back-yard without one of us being out there to watch him. But now I'm reading about a little boy half a world away who roams the slums and dumps scrounging for food to eat and searching for a safe place to sleep before night falls.

I was bracing myself for the part in the story where some nice christian Americans would show up to adopt Matthew and give him the home he has been longing for... but it never came. The story ended much like it started, or maybe even worse. Matthew still has no home, and when he is old enough to fend for himself he will leave Noah's Ark children's ministry and try to survive on his own. I felt sick when I finished reading the article and I said to Taya, "I'm really sorry, I thought it was going to have a happy ending." She responded that this was reality, and "not all stories have a happy ending."

The point was driven home even harder for me when, a few days later, I had the opportunity to spend some time with a couple from Malawi, one of the ten poorest countries in the world. Ignatius and Astrid work with FamilyLife in Africa and they were here in Little Rock to share their ministry. Ignatius told me that of his countries' 12 million people, 4 million are HIV+, there is a 40 year life expectancy, and there are over One Million orphans. 1,000,000...That's more orphans than the number of residents of Detroit, or Seattle, or Memphis. He also told me that 1 out of 3 people in Malawi go to sleep without having had ANY food that day. I began to feel sick to my stomach, because at that point I had already eaten a full breakfast, a snack, and a full lunch complete with Doritos and a pudding.

It was amazing to hear this couple share about how FamilyLife could actually help their country. I had been thinking, in the light of such devastation around them, how could they possibly work on building strong families? But they say that if their country is going to be strong, the families that make up the country will need to be strong. They are looking at all of the obstacles as opportunities to reach people, to share the love of Christ in tangible ways, and to build strong families that can care for the orphans around them. Once again, we saw that "family" is the one thing that everyone on earth has in common and it seems to be a phenomenal platform for reaching people with God's love. Ignatius and Astrid even invited us to come see it first-hand by doing a marriage conference in Malawi and Tanzania and we'll be praying for an opportunity to do that.

You know, as I type this, I don't even really know where I'm gong with all of this. Maybe I'm just venting. I guess this could just be posted under the category of "unfinished business" or "no happy ending, yet". But I guess it was just such a strong reminder to me of how blessed we are, and of the responsibility that comes with it. Our friend Kent who is a missionary in South Africa recently sent an sad email after visiting an orphanage and massive cemetery full of 3-foot long graves of little kids, the same age and height as my little boy, whose life has been cut short by Aids or famine. He signed off the email with this phrase: "Blessed to be a Blessing, Kent". Isn't that so true...

So again, I don't know how to put a happy ending on this, but I guess if you wanted to try to help you could give a gift to the Noah's Ark ministry which is now trying to build an entire town in Uganda to care for the orphans, you could click here: www.gainusa.org/ChildrensTown.cfm. And then pray that God would have his way in the ministry of Ignatius and Astrid, and in Malawi and in all of Africa. And I guess you could be praying for a home for Matthew.

Recently, I heard Rick Warren offer a couple of catchy quotes: "A single raindrop can't do a thing, but a million drops of rain could turn a Desert into an Oasis..." and "A snowflake is fragile, but if enough of them stick together they can stop traffic." I guess if enough of us Christians would pull together and realize that we have been "Blessed to be a Blessing" we might actually be able to have a happy ending in Africa after all. 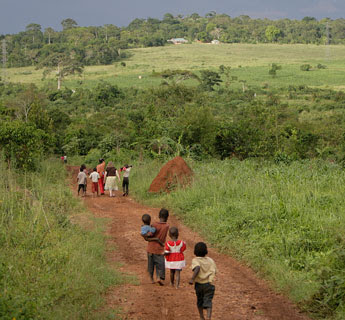 "If you can't feed a hundred people, try feeding one." ~Mother Teresa

Thankyou kids for another "heart wrenching" and hopefully "heart changing" letter.
Our hearts were broken as we read this and are asking God..."what can we do to be a blessing"?
We love you...
Mom and Dad Black