I just read this encouraging story from Mission Network News about one of the other ministries connected with Campus Crusade for Christ that we get very excited about, The JESUS Film Project (FamilyLife is a ministry of Campus as well). It's by far the most translated and most watched film of all time (Disney's "Lion King" is distant distant distant second) and it's still having a profound impact on people all over the world today. We hope to go on a trip with the ministry sometime so we can see with our own eyes what happens when someone sees JESUS for the very first time. If you'd like to view the film online, feel free to click on the following link and choose your language: www.jesusfilm.org/languages/index.html.

"...A year ago, JESUS Film Project missionaries Bruce and Jan found themselves surrounded by a group of heavily-armed terrorists in Peru. The couple and other members of their team were interrogated and searched, and their projection equipment was stolen. They handed over the JESUS Film as well. A year later on a return trip to Peru, one of the attackers, Jose, located Bruce, telling him that they had intended to kill his team that day. Instead, the attackers brought the film back to camp where 700 people watched it. Jose had become a Christian as a result of this encounter with the person of Christ, and he is now a pastor who sends missionaries around the world." 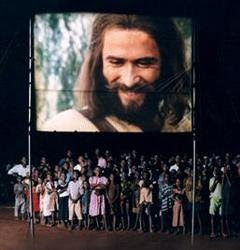 We would love to go with you sometime and see what happens to people when they see Jesus for the first time....that would be amazing!!!!
Love Mom and Dad Black