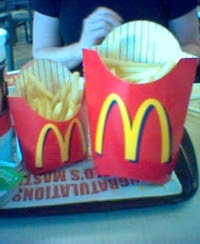 We were driving late into the night on a recent trip and decided that we had to stop for some rest, so we took the next exit and stayed the night in a cheap motel in small town in the middle of Oklahoma. The next morning we drove through downtown looking for a place to eat breakfast and finally settled on a McDonald's. While Taya was finding a table and a high-chair for Isaiah, Ross put in our order and was trying to make some small talk with the guy behind the counter... so he asked him, "how big is this town?" There was a long pause, and our server just looked back at Ross with a blank stare for what felt like 20 seconds, then he looked down at the cash register and finally out at one of the big posters advertising a combo meal. "I guess it's, uh, um... a Medium sized town..." Ross could barely contain his laughter. He wanted to reply, "Really? It's not super-sized?"
You know you've been working at McDonald's too long when a city population and an order of French Fries can be tallied the same way.

very funny =) this made me laugh. I love how you see humour in real life situations.
Love Mom