We love hearing about different ministries of compassion. I came across this today and thought it was something pretty exciting and inspiring. Martin Smith from Deliriou5? and the other artists mentioned here are at the top of our favorite music groups and it's exciting to see some of the long-time leaders of Contemporary Christian & Worship music coming together to make a difference. One of my favorite slogans/quotes is that "together we can do what none of us could do on our own", here's a bunch of creative people's idea of "together"...
COMPASSIONART HOSTS MULTIPLE GRAMMY, DOVE AWARD WINNING ARTISTS AT INTERNATIONAL SONGWRITER’S RETREAT JAN. 7-11 IN SCOTLAND, UK
Songs To Be Forever Donated To Help the Poorest of the Poor 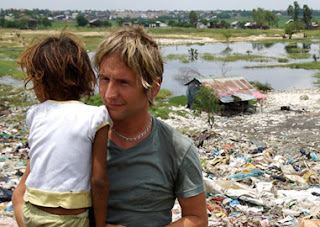 (Littlehampton, England) December 3, 2007 – Compassionart is hosting internationally recognized songwriters Michael W. Smith, Steven Curtis Chapman, Chris Tomlin, Darlene Zschech, Matt and Beth Redman, Tim Hughes, Paul Baloche, Israel Houghton, Graham Kendrick, Andy Park, Martin Smith and Stu Garrard (Delirious?), at a gathering in Perthshire, Scotland Jan. 7 – 11. 2008. The songwriters’ unprecedented goal is to collectively write 10-12 songs that will be given to the world not just to sing, but to raise money for the relief of suffering around the planet. Together these songwriters account for at least 42 million albums sold, 82 No. 1 songs, nine GRAMMY Awards, 110 Dove Awards, two Stellar Awards, two American Music Awards, and 98 current CCLI Top 500 songs sung by millions in churches around the world. Now, for the first time ever, the songwriters offer their time and talents with one voice to make a stand.

One hundred percent of the proceeds derived from the songs written at the Compassionart retreat will go directly to charity. One half of the monies will go to the songwriters’ charity of choice, and the other 50% will go to a charitable project agreed upon by all the songwriters involved. 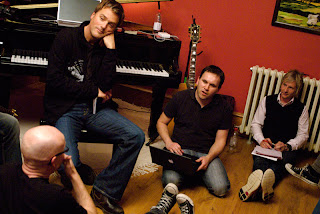 “Over the last few years I have had the privilege of traveling to some of the poorest parts of the world and seeing first hand the plight of humanity,” says Martin Smith, Delirious? frontman and Compassionart founder who is organizing the retreat along with his wife, Anna. “As a song writer and a person with a microphone I made a promise to try and do something about it. What better than to call on my friends and do something together. To be people that can make a change rather than just singing about it.”

Remarkably, the songwriters, publishers, managers, copyright institutes and agents involved have all waived their rights and are donating their efforts on this project to Compassionart, a charity based in Littlehampton, England and dedicated to seeing works of art generate income for the poorest of the poor. And this is not a one-time offering or marketing ploy, but an ongoing effort for charity derived over the songs’ lifetimes. 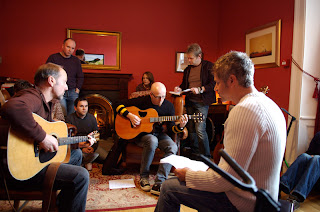 “They have all waived their rights to see something historic happen- the music business coming together for something great, greater than any individual could achieve,” continues Smith.
The participating songwriters echo their enthusiasm for Compassionart and what it hopes to accomplish:

“...Isaiah 58 is the passage that I go to now more than any other, knowing that if we feed the poor, satisfy the needs of the oppressed and reach out to the downtrodden, the Lord will indeed make His face shine upon us.” ~Michael W. Smith

“I’m eagerly anticipating this time! Coming together for this time of writing with the purpose of helping the poor and oppressed is an honor. Whenever I’ve had a chance to be with orphans around the world, what many would call the least of the least, God makes it so clear to me that He has not forgotten them, that He is for them and calls them His dearly loved children. I’m praying that this time and collection of people that Martin and Anna Smith have helped call together will be greatly used by God for His glory. And I’m very hopeful that the songs He gives will draw attention to and help those desperately in need.” ~Steven Curtis Chapman

“...Who knows what God might do as we lay down our agendas and work together to write and create God inspired songs that beat with His heart for justice.” ~Tim Hughes

For more information on the Compassionart songwriter’s retreat, go to compassionart.co.uk

You have been tagged for a Meme. God Bless. You look like a wonderful Christ-centered couple.