FYI, This IS an emergency... 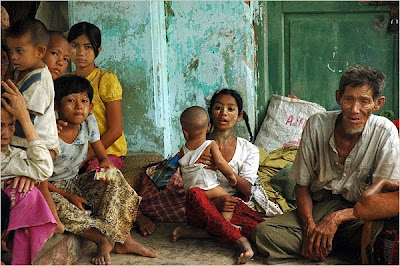 By now you've probably heard about the cyclone that hit the already poverty-stricken nation of Myanmar (formerly Burma). As if the rape and torture of innocent women and children, used as a weapon to strike fear into the citizens, wasn't enough. The wacko military dictators are refusing to acknowledge that there is a humanitarian crisis happening in their backyard. Early estimates are showing that the massive cyclone caused more than 20,000 deaths, 41,000 people are missing, and more than a million are without shelter and clean water (corpses are being thrown into the water, causing even greater contamination). Diseased and contaminated drinking water could possibly kill twice as many people than the cyclone did. It is an emergency. Yet as I watched the news today, I heard more about Hillary's shrinking superdelegates and the price of postage stamps going up by a penny.

If you were wondering how you can help, we suggest a ministry associated with our organization called GAiN. Global Aid Network is well-positioned and is already distributing food, purifying water, and developing emergency shelter from weather and mosquitoes. And they are doing all of it by equipping the local Christians to serve their neighbors. The people who have beaten down and persecuted, cut off from believers around the world, are now being equipped by other Christians to bring life and hope and healing in the midst of the depravity. I believe God is going to use this to spark a revival in Myanmar.

I love the compassionate heart that wrote this haunting song, "Tears of the Saints". In one line he's crying out "this is an Emergency!" and in the next he's hopeful that the children of God will surely reach out their hand to the broken.

We were just at friends house tonight agonizing over what is happening in Myanmar...we cried and prayed that God would move over that country and ours.
This is an emergency!
Love Mom