This is a crisis: 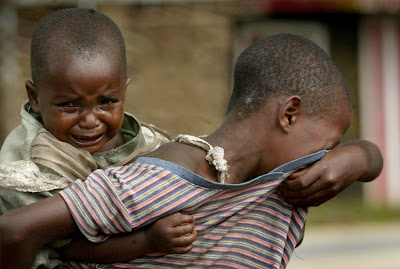 Nov. 6, 2008:  Young Protegee carries her niece, Response, as she looks for her parents in the village Kiwanja, 90 kms north of Goma, eastern Congo.  Protegee was in a crowd of thousands in the town of Kiwanja, having walked for three days by herself after being separated from her mother as they fled on foot from her town about 12 miles (20 kilometers) away. Protegee finally found her mother, Esperance Nirakagori, in Kiwanja at a makeshift refugee camp six days after they were separated. (AP Photo/Jerome Delay) 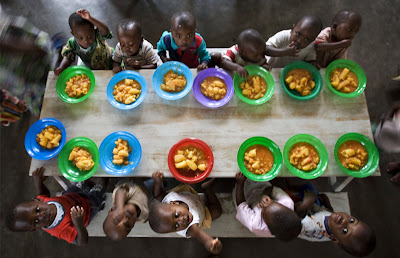 Nov. 6, 2008:  Children who have been abandoned or orphaned by war eat dinner at the Don Bosco center in Goma in eastern Congo, November 20, 2008. Fighting in eastern Congo has displaced hundreds of thousands of civilians in recent weeks, with 1,519 people taking shelter in the Don Bosco school compound. There were 89 children with no parents among them. (REUTERS/Finbarr O'Reilly)

To view a haunting photo essay of the humanitarian crisis in the Congo, click here.
If you are interested in helping with a real crisis, click here.

"May my heart be broken with the things that break the heart of God." ~Bob Pierce
p.s. This gives a new definition to the term "working mom": 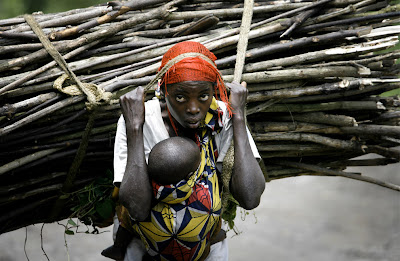 Thank you for putting our "worries" in perspective. How trivial the things I waste my time worrying about when there are such real needs in this world. Your family is such a blessing to ours!
Love you, dear friends!

Yes, yes. And may we not forget.

Seeing these pictures puts it all into perspective again...may we be truly thankful this Holiday season... you are precious to us and we love you. Happy Thanksgiving!

Thank you for correcting the perspective of 'crisis'. It is humbling to say the least....