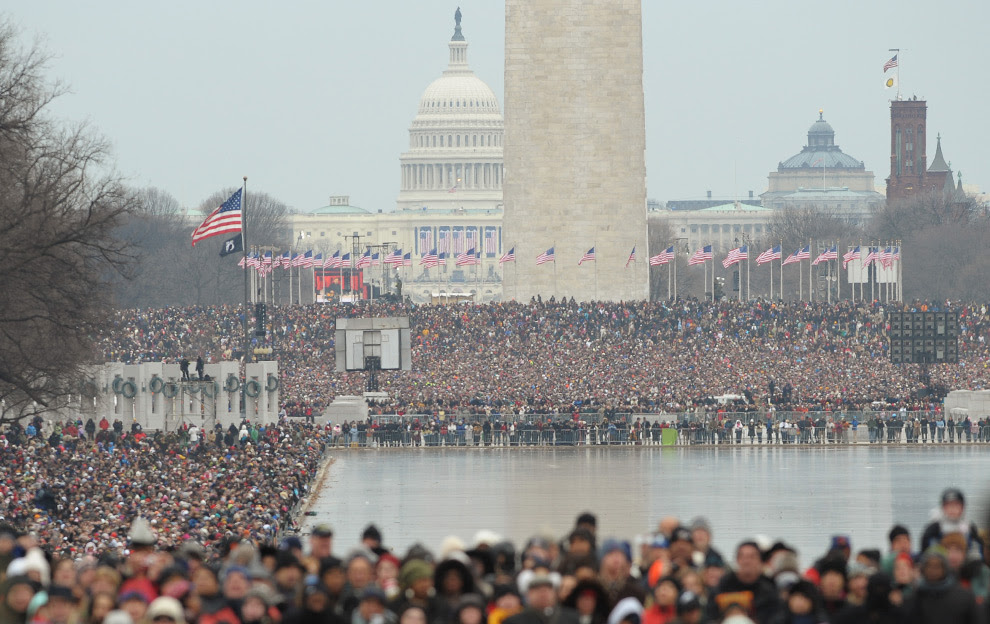 *photo courtesy of MANDEL NGAN/AFP/Getty Images
If you find that you just aren't hearing the word "inauguration" enough today, be sure to visit Brittanica.com for a quick rundown of memorable inauguration moments such as:
Most surprising moment at an Inaugural Ceremony:
on January 20, 1953, when Texas-born Dwight Eisenhower, in the reviewing stand, was lassoed by a cowboy who rode up to him on a horse.

Rowdiest inaugural celebration:
at Abraham Lincoln’s inauguration, the crowd grew so rambunctious that the police had to be called in.
Notable inauguration phrases:
Ronald Reagan’s first Inaugural Address, January 20, 1981, pressed a new idea to reverse the growth of big government: “In the present crisis, government is not the solution to our problem.”
Abraham Lincoln’s second Inaugural Address, March 4, 1865, during the closing days of the Civil War, called for “malice toward none,” and “charity for all.”
Email This Share to Twitter Share to Facebook
Labels: Fun Stuff, Quotes

Having been on the National Mall, I can imagine that being part of that crowd would have been an overwhelmingly claustrophobic experience for me...Not to mention trying to ride the Metro out of there! Incredible! Today I was thinking how satisfied President Lincoln would be to know that a black man had followed him into the presidency. In spite of the divergence of my philosophy with President Obama's, I do appreciate the history and accomplishment of this day with some gratitude.