July in the Rearview Mirror...

We've spent a lot of time on the road over the last few weeks. Every two years our organization gathers all of our US Staff to Fort Collins, Colorado, for a time of teaching, training, connecting, and corporate worship. Now that the 2000+ mile road trip is over, it's time to take a look in the rearview mirror to see where we've been. Here are a few of our highlights from the trip...
Road Trip:
We had almost 50 hours in the van together and enjoyed great conversation and fun listening to music as we went. We saw this moving truck in Oklahoma City, which had us smiling all the way to Amarillo. 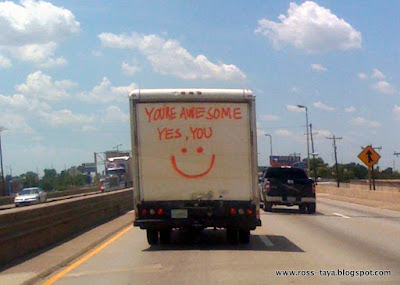 Creation:
Whether using a cell-phone camera, digital camera or one of those fancy wide-angle-super-zoom-canon-rebel-xt-hotshot cameras, it is simply impossible to capture the beauty of the Rocky Mountains through the lens of a camera.
We took a drive up to Rocky Mountain national park and just stood in awe at the massive mountains, the delicate flowers, the wild animals and the grandeur of God's creation.
Then we realized that it's just one tiny little part of one tiny little park in one tiny little state on one tiny little planet in one tiny little solar system in one tiny little galaxy... and God holds every square inch of it in the palm of His hand. Incredible.
We also saw no less than 20 rainbows while we drove and many incredible sunsets over the Rockies (including the most beautiful one over the Arkansas river as we pulled back into town). 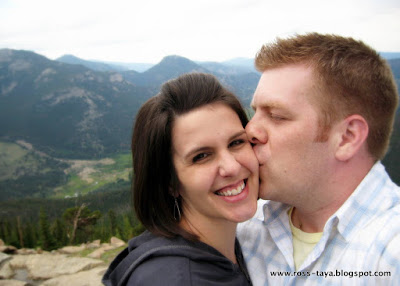 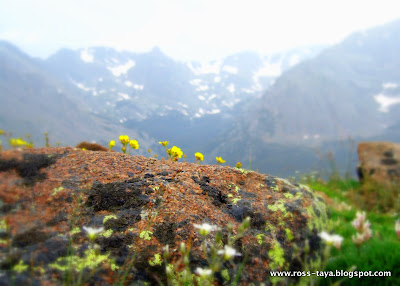 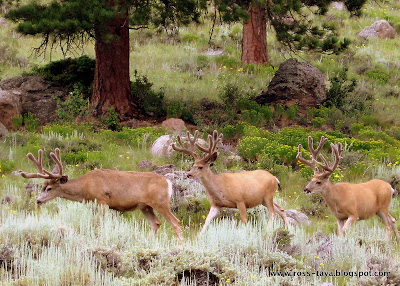 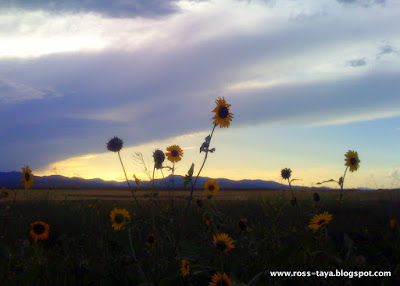 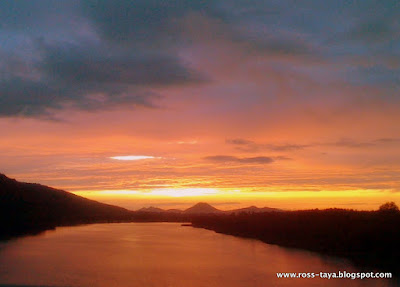 Conference:
It was so fun to meet up with coworkers and hear about the incredible things God is doing around the world. We were also challenged to step out in faith as we heard their stories. We were challenged by Tim Keller, Keith Battle, and the Campus Crusade leadership to be a good neighbor and good witness.
The times of corporate worship and a concert by Tenth Avenue North were also highlights. It was so powerful to hear 5,000 other missionaries singing at the top of their voice:

"Take my life and let it be, consecrated Lord for thee... 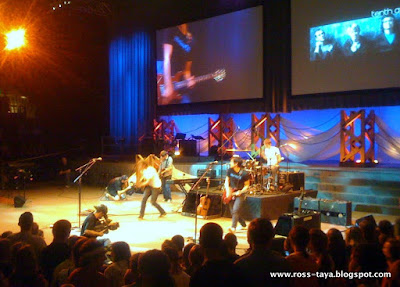 "Social" Media:
Ross was a part of the "Tweetdeck" during some of our sessions. The purpose of the Tweetdeck was to make the conference extra-interactive. During all of the sessions we had a team of people gathering questions and feedback from staff on Facebook, Twitter, and via Text messages. This was one of the highlights for Ross because it turned what could have been a very impersonal setting (6,000 people in a big arena) into a very closely connected setting, and many new friendships were formed through these connections. We also got to experience our first "Tweetup" where we used Twitter to spread the word and gather 100+ friends in the basement of the Wild Boar Coffee House. You can click here to see what other staff members had to say during the conference on Twitter. 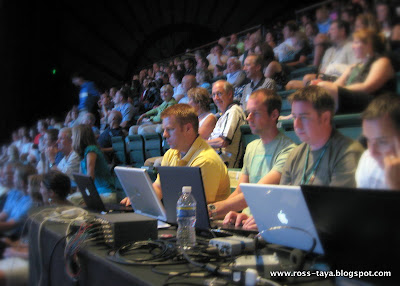 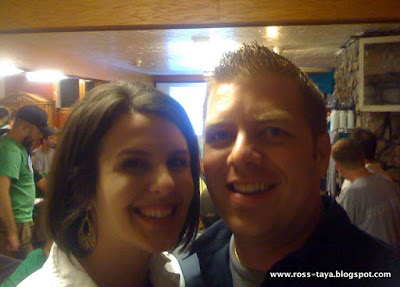 Family:
Ross' parents met us in Fort Collins to watch the boys while we were attended the conference. They went fishing, threw plenty of rocks in various bodies of water, ate lots of ice cream, and made great memories. Then, after the kids were in bed and we were done with our sessions for the night, we stayed up late drinking coffee and talking about all that had happened that day. It was a sweet time for all of us. 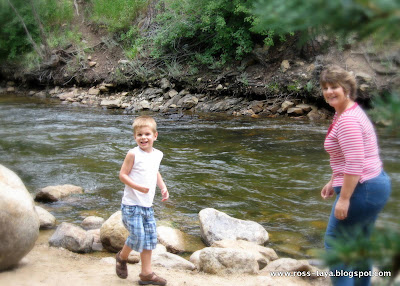 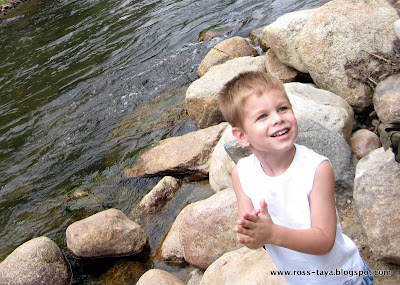 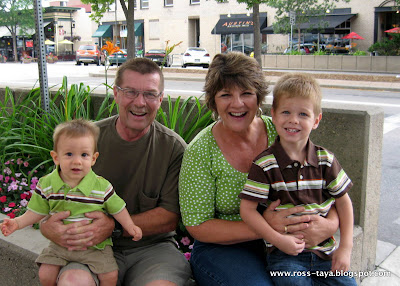 Adventure:
Ross and Dave had a "Wild at Heart" moment by going white water rafting (Ross is the one in the front of the boat wearing a too-small-for-his-head helmet), while Isaiah got a taste of being a wild man by going on the big slides and racing Lightning McQueen scooter all over the beautiful campus of CSU (he's still got the scrapes to prove it!). Besides cruising around in the stroller, the only real adventure Elijah faced was getting his first hair cut (we got a great bed-head picture the morning of his haircut!). 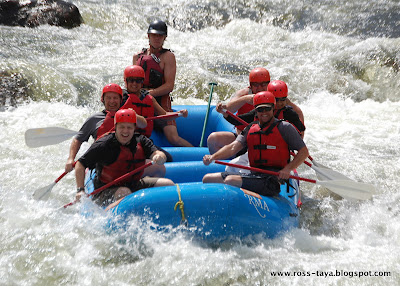 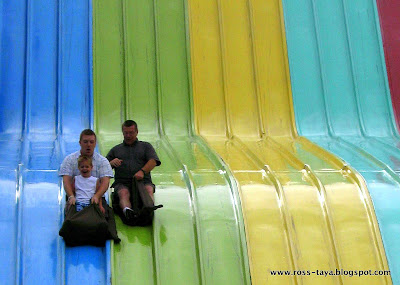 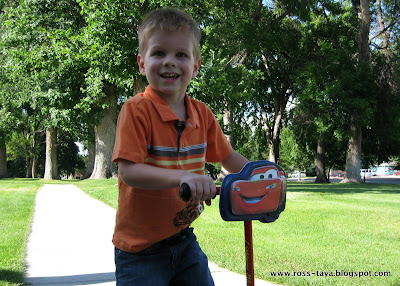 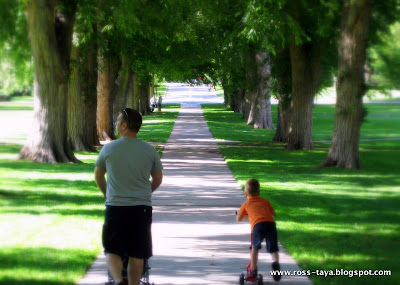 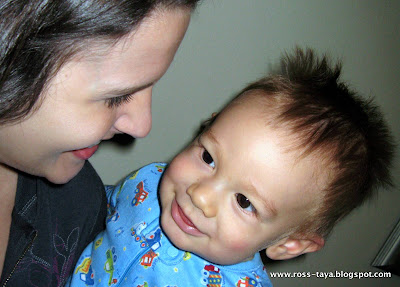 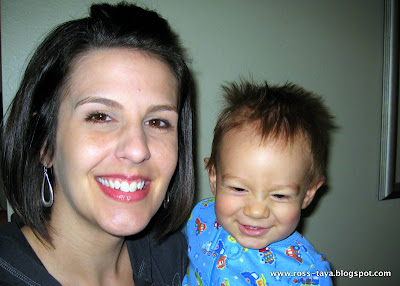 The Road Ahead:
It has been an incredible month for us. We are so privileged to be able to serve in this way and to be a part of this movement called Campus Crusade for Christ. It's fun to look in the rear-view mirror, but we're even more excited to look at the road ahead of us. We don't know what's around the corner, but we're prepared to follow God wherever He leads us. Near the end of the conference, one of our leaders said it best:

"Jesus is our compass. His name is the one we will lift up. If He is lifted up, He will draw all men to Himself. That's what we're going to spend our lives doing."

Thanks for the "report". Nice to hear about your adventures. I know exactly what you mean about God's awesome creation and how vast it is to us, but so small in the big picture. Amazing!

great picture of the tweet-deck! i look so serious :) fun to meet you both in person!