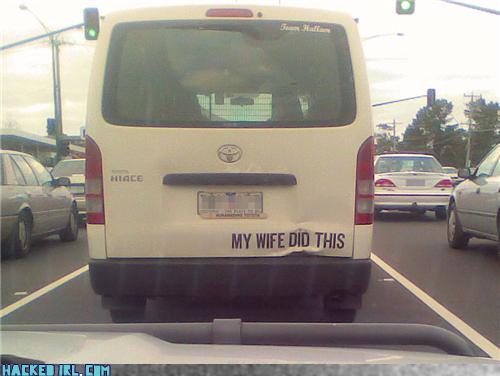 How would you like to be married to the guy in the photo above?
Rather than patching things up after a minor accident, he chose to lash out with a bumper sticker that tells the world what his wife has done. It is a funny picture, but it's all too common in many marriages.

Do you play the blame game instead of putting in the effort to fix the problems & make true peace?

Pursuing peace is one of the secrets to having love that lasts, but it's not easily done. When confronted with the choice of holding a grudge or offering forgiveness, it's helpful to imagine yourself in the other persons shoes (not literally "in" their shoes- that wouldn't be helpful at all! =)).

I saw this statement the other day & thought it perfectly captured the range of emotions we all battle when we've messed up:

So many of us consider these possibilities & are tempted to cover up our own wrongdoing, hoping we'll get away with it. While the offended spouse (out of fear, anger, or sadness) is tempted to lash out like the man with the bumper sticker & say "I'll get even with you! Next time you'll think twice before hurting me (or my precious white van)."

Forgiveness is so costly to the giver & so precious to the receiver. Will you offer it?

"Forgiveness is the fragrance the violet sheds on the heel that has crushed it." ~Mark Twain

p.s. Turns out there the guy with the bumper sticker just didn't shop long enough. Here's a $4 alternative that would probably make his wife feel like a $1,000,000. 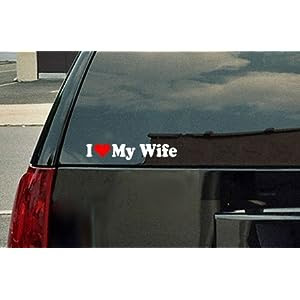 Ross - still checking your blog from time to time. Loved this post. I even used it on our blog - giving you credit, or course!

Hope y'all are doing well. God bless you.

Thanks Glen, we follow your blog too! We miss you & the rest of the FamilyLife crew, but we do feel like God is using us and growing us. Thanks again, ross