A couple of weeks ago I wrote about the easiest way to make Jesus angry (by being overly religious without loving people). However, as I've thought more about it I've realized that anger isn't always a bad thing, is it?

Some people have a perception that in the Old Testament God is angry, but in the New Testament God is loving. As if they are two separate books with two separate Gods. They believe that it is impossible to be loving and angry at the same time, and because they see the anger, the don't want anything to do with the love.

The ignorant, uninformed, or skeptic might stumble on this, but I believe that a logical person (or at least any good parent) will tell you that it is possible to be both loving & angry at the same time.

This is an issue that has been gripping our hearts lately. We probably have not been angry enough about some things we have seen & heard about, & as a result, we probably haven't been loving enough. How can we know the evil things being done to helpless children & claim to love Jesus, but not do anything about it? Could a loving parent really be loving if they didn't get angry about pain being inflicted on their children?

For us, one area that we have simply not done enough is caring for orphans, widows, & children being sold into slavery. We've heard the stories & we personally know of several great organizations that are battling injustice, but we haven't been angry/loving enough to join with them. 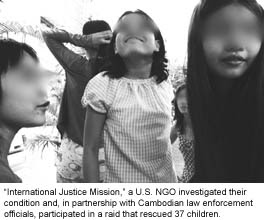 What makes you angry?

Don't you see that it's good to be angry sometimes? Could you possibly love a God who didn't get angry about some things? I don't think I could.

There is a quote by Saint Augustine that has really resonated with us because it ties in the concept of being loving, being parents, & being angry enough about injustice that we would be moved to action:


“Hope has two beautiful daughters: their names are anger and courage. Anger that things are the way they are. Courage to make them the way they ought to be.”

So what makes you angry?

Would you let us know in the comments what makes you angry...  we'd like to pray for you: that God would give you the courage to show love in the midst of injustice (& maybe we can join you in doing something about it).

What makes me angry:
1. materialism and self absorption of Christians that hinders us to give beyond the imagined.
2. that people die from preventable disease
3. the orphans and vulnerable children are left to fend for themselves without much thought from most of the world.
4. racism

what makes me angry (and very, very sad and emotional) is divorce. especially among believers. it hurts my heart. and it ticks me off that people are willing to so readily break a covenant they made with God as their witness. it's been easy for me to "love the sinner, hate the sin" regarding divorce, but hard for me to really convey how much i do NOT condone it.