Shakespeare once wrote that it is “'one thing to be tempted, another thing to fall.”  If we were to look back on the things we regret in our lives, we probably don’t regret temptations that came along as much as we regret our response to them. 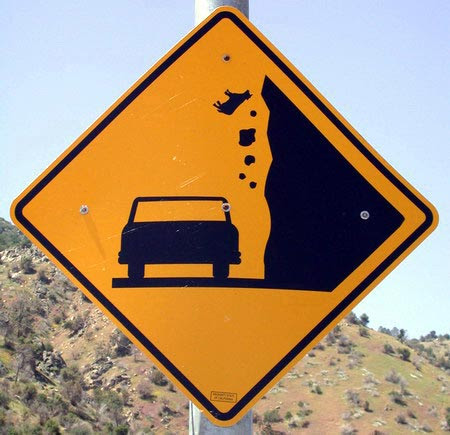 How many people would see a sign that warns of cows falling on the road and dismiss it as ridiculous, and just carry along down the road?

In Genesis 3:1-7, we see Adam and Eve responding to temptation. Unlike the sign in the photo, Adam and Eve did not have a sign warning them temptation was coming. However, much like the sign, who knows if they would have even heeded taken it seriously?!?

If someone had warned them, “a talking snake will tempt you to deny God’s authority in your life and will tempt you to do the ONLY THING God forbids you to do...” I would imagine that they may have laughed, considered the advice insignificant, and just carried along down the road.

The Genesis account says that “the Serpent was crafty...”  (skilled in deception)

Like a driver being warned of the possibility that strange debris may be falling from the sky, 1 Peter 5:8 warns us of unexpected and dangerous debris headed our way: “Be alert and of sober mind. Your enemy the devil prowls around like a roaring lion looking for someone to devour.”